Horse races have been around for a very long time (think Ben Hur and even before that). There are many things people who follow races for entertainment and betting have intimate knowledge of, but we are here to talk about a few of the fewer known fun facts about horse racing. Here we go!

Imagine having a disease where you cough up blood, have no appetite, and feel pain while breathing. Now imagine having to race and actually winning! This is exactly what happened to Humorist, a horse that had tuberculosis and still won The Derby in Britain in 1921. Normally, this type of thing does not happen, as horses are inspected for health problems, but, for some reason, Humorist ended up on the track with one functioning lung and taking the prize.

There is no rule that states that all jockeys must be under five feet tall. However, they can only weight up to 126 pounds. Putting that into consideration when calculating the strain on the horse during races and taking into account the fact that aerodynamics play a part, it is little wonder that jockeys are predominantly short. Would you believe that there have been jockeys that weighed under 100 pounds? 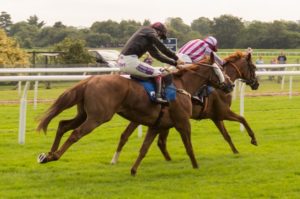 It is hard to keep track of your friends’ birthdays, isn’t it? Facebook and other services like to remind their users of the fact, lest we be deemed uncaring. However, horses have a different system. If a horse is born in the northern hemisphere, their birthday is on January 1st, whereas their southern siblings have their birthdays on August 1st, regardless of the actual date. This is done to keep track of the horses’ age. Not sure if the horses care that much, though.

Typically, racehorses have a lifespan of about 30 years. Most of them retire at the age of 15, as it is well past their prime and they are not likely to bring home any trophies. There are a few exceptions to the rule, though. Fred Winters and Sonny Summers are horses that managed to win at the amazing age of 18.

There are many horses that pushed the limit regarding their golden years. Magic is one of them, though we don’t know whether the mare is still alive at this point. Polish Arabians are known for their above-average lifespan, but the horse celebrated its 46th birthday in 2015.

Another oldie that died in 2015 is Orchid, a Thoroughbred Arabian-Cross, that made it to 49. The oldest pure thoroughbred is Prospect Point, having died at the age of 38. Scribbles, Shane, and Badger all made it past 50.